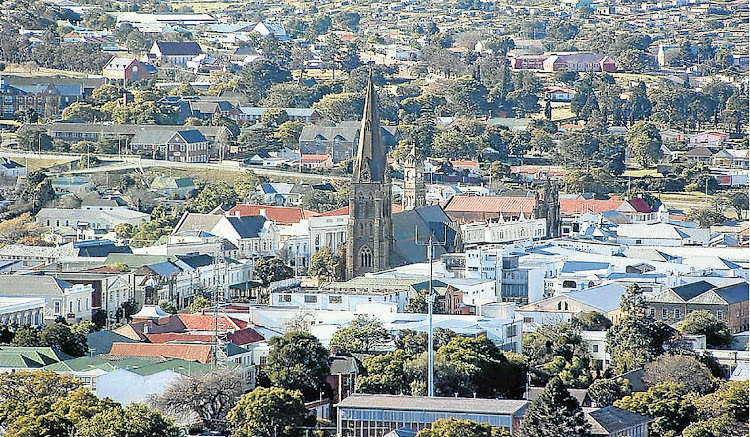 CONTROVERSIAL HISTORY: A view of the Grahamstown CBD with the cathedral spire in the centre
Image: Wikipedia

Welcome to Makhanda! Goodbye to Grahamstown.

Just as the National Arts Festival got under way in the city, Arts and Culture Minister Nathi Mthethwa announced he had gazetted the name change, which was the last stage of a 20-year discussion process, he said.

But the battle for the city’s name is far from over with the main opposition group Keep Grahamstown Grahamstown (KGG) saying it had not excluded the possibility of resorting to court to keep the city’s original name.

KGG chair Jock McConnachie questioned the legality of the public consultation process and said it was possible they would go to court.

Mthethwa said the process followed was exactly in line with legislation. He said Colonel John Graham, after whom Grahamstown was named, was one of the most brutal and vicious British commanders on the frontier.

“Makhanda, also known as Nxele, was a Xhosa warrior, philosopher, prophet and military man who fought against colonialism in battles that include one [Battle of Egazini] where he led an attack against the British garrison in Grahamstown in 1819.”

He was jailed on Robben Island and drowned while attempting to escape the notorious prison.

Ironically, the newly named Makhanda falls under the Makana municipality. They are alternative spellings for the same Xhosa philosopher-warrior.

While some will welcome the name change and others decry it, residents in Makana have been far more concerned about municipal governance in the region.

Makana municipality has become known for its collapsing water, road and sanitation infrastructure, mass sewage leaks and a disastrous municipal rubbish dump which has been the frequent subject of litigation by concerned citizens fearing for their health.

Mthethwa said it had been standard practice to change names such as Grahamstown, which were not in line with the letter and spirit of the constitution.

“It is the Truth and Reconciliation Commission that recommended that the renaming of geographic features be a form of ‘symbolic reparation’ to address an unjust past.”

Mthethwa said he wanted to be “crystal clear” about the importance of name change in the national effort to transform the country.

McConnachie urged citizens to send objections to the name change to the minister within 30 days.

He said he had not yet seen the gazette changing the name of Grahamstown.

“The government has to date found far more resilience to name change than they expected here in Grahamstown and I predict that the battle is far from over.”