South Africans’ favourite lunchtime grub is a braai, a global survey has revealed.
Polish online food website Pyszne.pl, sourced data from over three-million restaurant reviews in 151 countries to find the most dominant lunchtime dishes for each country.

Research has shown that colour is the most effective sensory cue when it comes to imagining the flavour of food, inspiring Pyszne.pl to uncover the colour palette of each country’s typical lunchtime meal.

According to the research, SA’s colour palette ranged from dark browns to peaches and beige, with a braai emerging as the most popular lunchtime meal.

“The meal can include a whole host of meats from boerewors to steak and game meat, and includes accompaniments such as potato bakes and corn on the cob.”

A sample size of 30 SA restaurants and 15,759 reviews were analysed, with the most mentioned being braai.

“Our sampling method prioritised the most popular restaurants in densely populated locations. While this does limit the study to urban centres, it provides us with a diverse range of restaurants and reviews crucial for the study. As we analysed reviews from a reputable food ordering and review site we can assume it’s from a range of takeaway and sit-down eateries but it’s not possible to say for sure,” a Pyszne.pl spokesperson told TimesLIVE.

“Specific preference was given to dishes deemed suitable for lunchtime meals and to those whose primary colour could be unambiguously distinguished. While the distinction between lunch and dinner meals can be subjective and vary between countries, a judgment was made by researchers following individual research into each country’s consumption patterns and food culture.”

When it comes to other African countries, the research found that Nigeria’s food colour palette is made up of warm tones such as red and yellow as well as green and beige.

“Their most popular lunchtime dishes are jollof rice and efo riro, both of which use a stew-like base to build the dish contributing to the country’s red and yellow tones. The spinach and meat in efo riro and suya also contributes to the overall palette.”

Ethiopia’s food colour palette is made up of beige and brown tones thanks to their love of spice, meat and injera.

“Ethiopia’s most popular lunchtime dish is their hybrid dish of stir fry and stew, tibs. This rich and meaty dish can be spicy but clearly locals are willing to take on that challenge.”
The food colour palette of Tanzania is made up entirely of beige shades, this is due to their love of rice, maize and stews.”

“Tanzania’s most popular lunchtime dish is their national dish of ugali. The swallow, usually made from cornmeal, semolina or cassava flour, is paired with kidney bean stew and meat,” the research found.”

In the UK, kebabs and fish and chips paved the way for colours such as red, green and white. Kebabs are often accompanied by salads packed full of tomatoes and cucumbers as well as seasoned meat.

Fish and chips is England’s most iconic meal, especially when paired with mushy peas.
Canada’s typical colour palette is filled with reds, pinks and yellows due to the nation’s love of meat.

“Peameal bacon and smoked meat sandwiches are their most notable lunches, and contribute to the pink, red and orange tones of the colour palette.” 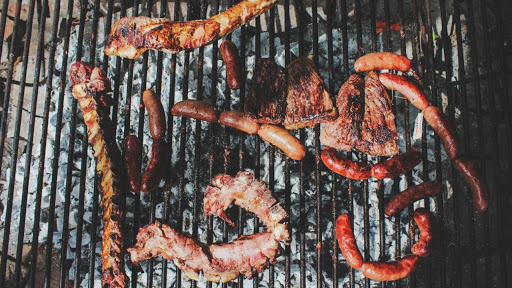 TO BRAAI FOR A braai is the most popular lunchtime meal for South Africans.
Image: Andrik Langfield on Unsplash

Spain: studless boots and all

Ramped up for Fashion Walk